It is one of the most successful planters in Argentina. Created in 1991, it has undergone some changes in form but not in content. With a slogan which marked the beginning of a transformation process:“THE ARGENTINIAN PLANTER FOR ARGENTINIAN SOILS”.
The change from conventional to no-till farming was a reality and this 10.000 model can be perfectly used for conventional sowing and then convert it for no-till cultivation.
More than 14 years have passed, and for many reasons this seeder model has kept its leading role in the market...  The high resale value of used planters places 10.000 model as a widely wanted and well-known machine in the market.

PRINCIPLES:
In order to do that and from the beginnings of its manufacturing, the characteristics which achieve these aims have been kept intact.
Ploughing blades, very narrow-angle double disc, covering V-shaped cog discs, fertilizer and seeds hopper (standard), very versatile for any type of soil because it employs the lever principle to transfer load to the coulters from the counterweight under the platform, stable and strong, easy and low maintenance, prepared to sow wheat, soya, corn and alfalfa, to fertilize in and out of the line.
12.4 x 28 wheels (big diameter) are placed in the same line which the 25 furrow openers sow, making it light to draw and of excelent operation in flooded areas. 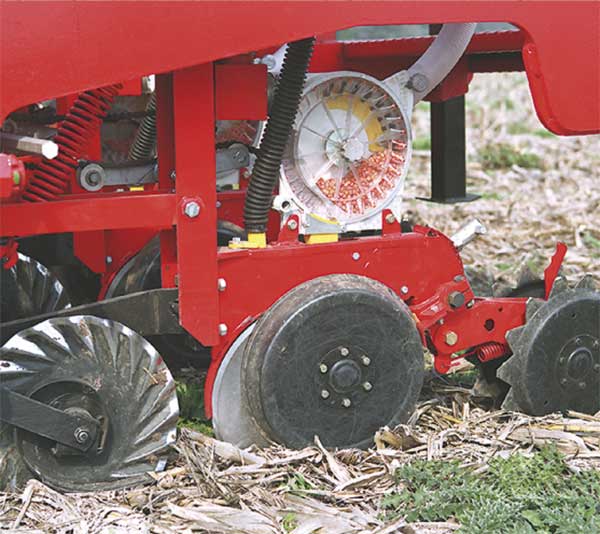 This machine can be assembled with different support and coulter configurations according to the areas and jobs to be carried out. 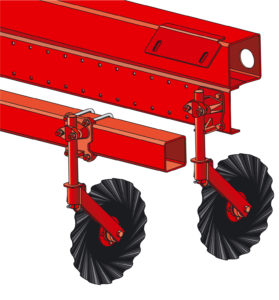 Coulters fixed to chassis and to bar

Typical configuration that has 13 coulters to chassis and 12 to bar; useful for future incorporation of discs for applying lateral fertilization. 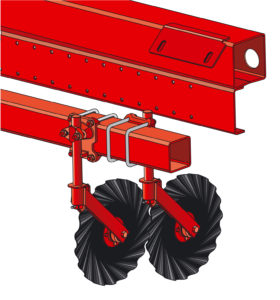 Very common configuration for having all equal supports; but little chance for lateral fertilization (wheat). 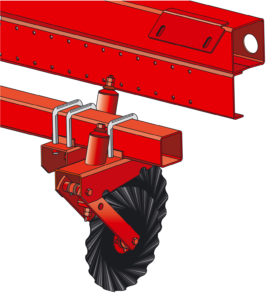 Used when soil surfaces have logs or stones (clearing in the north or hardpan in the hills); little chance for lateral fertilization (wheat). 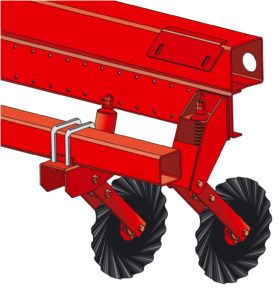 Configuration that distributes 13 coulters to chassis and 12 to bar. Used for soil surfaces having logs or stones; foreseen future incorporation of lateral fertilization (wheat). 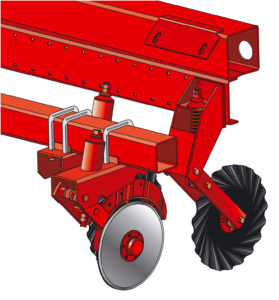 Our seeders offer the possibility of placing a double-disc furrow opener and a fertilizer hopper on the tool bar in order to carry out lateral fertilization. This is the same previous configuration with fertilization discs. 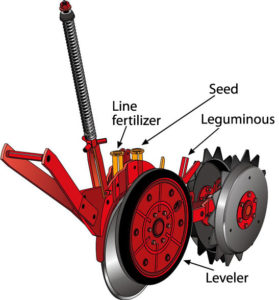 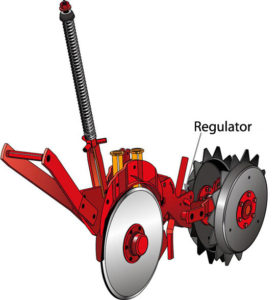 Double disc with rear V-shaped cog wheel, made of boron steel, quenched and tempered, with cog cam for depth control. 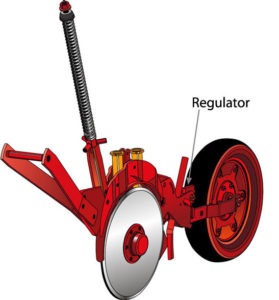 Double disc with straight, positive semiautomatic rear wheel, made of iron and rubber, and cog cam for depth control. 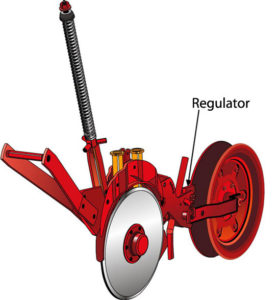 Double disc with straight, negative semiautomatic rear wheel, made of iron and rubber, and cog cam for depth control.

The alfalfa distribution system is of maximum precision. Plastic helicoidal distributors driven by gearbox offer accuracy in time and minimum quantities from 1kg per hectare are possible.
Desired depth is achieved by means of continuous adjustment, controlled by the delivery tube in the seeding unit. 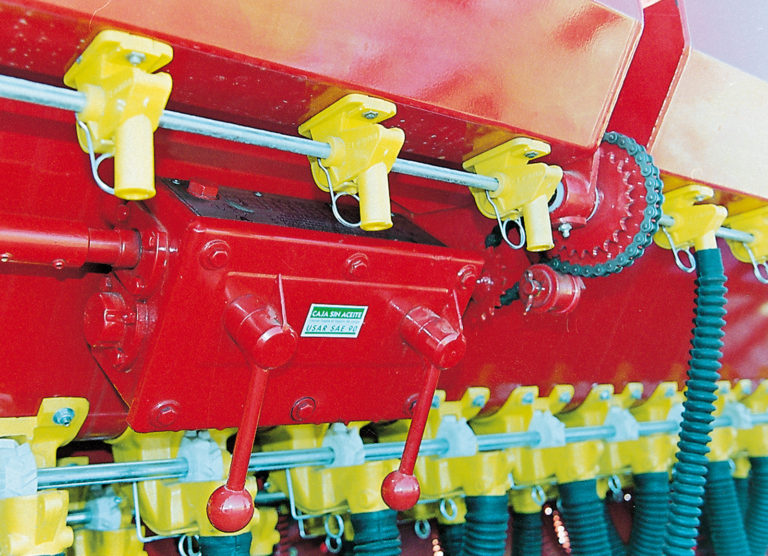 Four compensated cylinders with rack system operate the four transport wheels (6.50 x 16). Front-end wheels with revolving forks and fixed rear wheels. With a concept of “clean” design, it neither interferes with the platform nor with the farming coulters in the tool bar. It has large stability due to the four wheels placed at the ends. Transport width: 2.5 m. 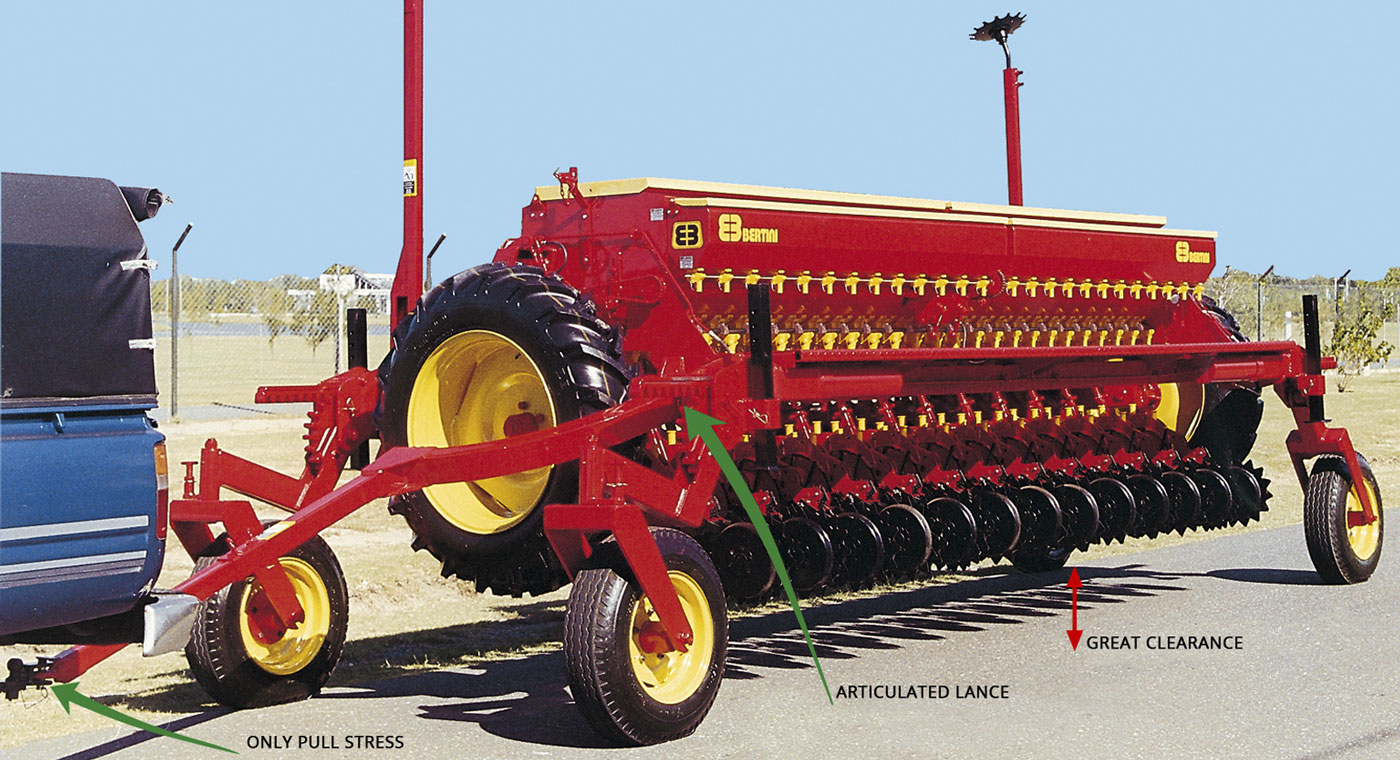